Leave What You Find

The whole idea of Leave No Trace and minimizing impact is that we do not leave any mark of our visit. It often takes a real effort for people to control their urge to write a message or pick something up.
The best tool you can take with you on an outing to help minimize your impact and still have great memories of your trip is a camera. Digital cameras allow you to take hundreds of photos for free and then pick out the best at home. 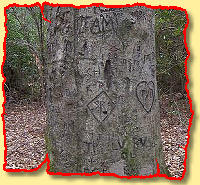 Leaving Your Mark
Some of the most common ways we 'leave our mark', include:

All of this graffitti ruins the area for the next people out exploring. At the minimum, the next few people are impacted, but it may be many many more. It also increases the likelihood that others will add their mark and increase the scar on the land. 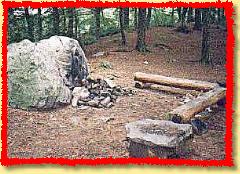 Comfort
It may be tempting to build a nice, big rock firering and cut some logs to arrange seating. You might want to cut a few low-hanging limbs that are in your way or pile some rocks to make a table area. Lashing together a towel rack or cutting a seat into a stump might make camp work a bit easier. Digging a few big rocks out and placing layer of pine boughs on the ground could soften your night's sleep.
All of these will change the natural appearance of your campsite. The area will be scarred and look like it receives more traffic. These changes will not make the site more useful for future visitors - they will only make it less natural and will encourage further changes by other visitors.

Souvenirs
I have an arrowhead in a box, in a cabinet, in my bedroom, that I've not looked at in over 10 years. We like to 'have stuff', but nearly everything we find in the outdoors is more valuable when left where it is. This arrowhead is neat to have, but it doesn't have any real worth.
Of course, if I found a 3 pound gold nugget, it would be valuable, but that is not the sort of thing people bring home from the wilderness as reminders of their trip. More commonly, we take:

The removal of all these things leaves a hole or scar where it was previously located and denies others their enjoyment. It's easy to convince yourself that just one arrowhead or a couple flowers won't make a difference. But, with hundreds or thousands of visitors, it takes little time to completely obliterate a site. Besides that, there are other significant impacts from removing these items:

Tips on Leaving What You Find

Leaving What You Find is Important because it:

Leave No Trace is a concept of modifying our ethical beliefs so that we make good decisions as conscientious land stewards rather than requiring laws to prevent misuse. Unfortunately, laws governing our use of the outdoors are still needed to help define expectations.
It is illegal to remove natural objects, such as antlers, rocks and flowers, from national parks and other protected areas. The Archaeological Resources Protection Act also makes it illegal to disturb archaeological sites or take artifacts from public lands. It is each person's responisibility to understand the laws and regulations of the areas they visit.

Debate the Principle
There may be reasons to make different choices when considering this Leave No Trace principle. Here are a few to think about:

Teaching Leave What You Find

Leave No Trace - or even LESS trace