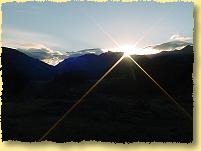 Just as we know perfection is not possible for people, we also know leaving no trace is not possible. Every minute of every life leaves a trace on the earth as it has always been and will always be.
Our challenge is to minimize the amount of impact and damage we do when enjoying the out of doors.

Why Leave No Trace?
In the 20 years from 1982 to 2002, participants in primitive camping more than doubled.
Backpacking participants nearly tripled.
Visitor days in designated wilderness areas reached over 16 million in 2000.
The US Forest Service estimates 205 million visits to National Forest System lands in 2003. About 9 million of those visits were to NFS Wilderness areas. ref

As the number of visitors increases and the amount of wild spaces decreases, the areas used receive more concentrated exposure to the impact from humans. To ensure we do not degrade the wildness of the places we visit, explore, and enjoy, we need to monitor our activities and strive to make the right choices which minimize our impact.

The 1964 Wilderness Act defines wilderness as:

The Wilderness Act was passed to "assure that an increasing population, accompanied by expanding settlement and growing mechanization, does not occupy and modify all areas within the United States and its possessions, leaving no land designated for preservation and protection in their natural condition".

As our country's populaton continues to grow and our cities expand into wildlands and existing recreation areas, we need to do more than just pick up litter and plant trees in the medians. The beginning of the 21st century, with our huge advancements in technology the past few decades, is a prime time to conscientiously take steps in maintaining the character and wildness of the outdoors. We do this not for ourselves, but for all living things and for generations to come.

Learning Leave No Trace
The concept and principles of the Leave No Trace land ethic is much more than a guidebook or a magic 12-step program to better health for wild spaces. Leave No Trace is a set of ethics, something to live as a way of life.
By learning the principles and then practicing the skills, we each can make a big difference on minimizing our impacts. Fortunately, this isn't rocket science - Leave No Trace is mostly 'common sense' stuff and it's easy to both learn and teach to others. But, it's stuff that is often just not thought about and often takes a bit of conscious effort to perform.

More than just memorize some rules to pass a test, Leave No Trace involves a changing of personal commitment. By developing a personal connection to the land and realizing the value of the animals, plants, and natural places, a person creates a reason to care about how the world is managed. Seeing yourself as part of nature rather than just an observer is a key to embracing the need to care for and preserve nature.

Next: Leave No Trace Principles
Ask LNT Dude a Question

Leave No Trace - or even LESS trace